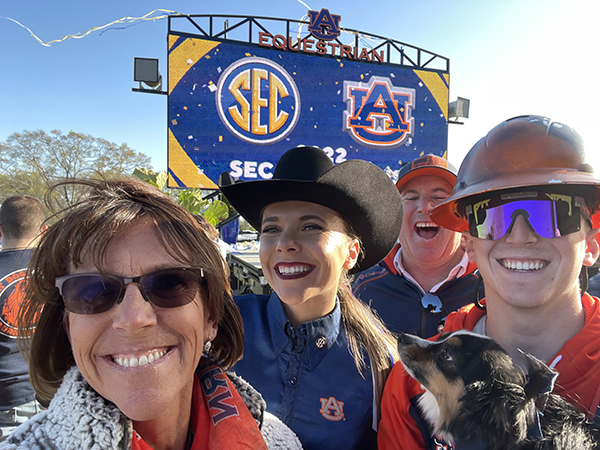 The Searles family was there to cheer on their daughter, Taylor.

AUBURN, Ala. – It was a big day at the Auburn University Equestrian Center as the No. 2 Auburn equestrian team captured its fourth-straight Southeastern Conference title Saturday afternoon, defeating top-seeded Texas A&M, 11-8.

“This was a team effort,” head coach Greg Williams said. “To win this for our seniors and super seniors means a lot and we are so thankful to do this in front of our Auburn fans. A very special afternoon for a very special team.”

“A lot of hard work went into this victory today,” fifth year Deanna Green said. “We ride for each other. When one has a mistake, another picks them up and we really showed that today.”

“Everyone on this team puts in 110 percent every single day,” senior Emma Kurtz added. “To win four in a row is so special. We all work so hard and wanted to do this together in front of our fans.”

“To have that string of championships and to feel like we can keep building on our legacy is huge,” Williams said. “The culture we have now is going to determine what future we have, and I’m really excited about it.”

“It’s been a crazy ride,” Green added. “This team teaches each other to be better every day. When you come to Auburn, you get rewarded for that.”

The win was the team’s first SEC championship win in front of the Auburn crowd after also hosting the championship in 2013 and 2017.

“We got to host the very first SEC championship here and lost and then hosted again four years later and lost,” Williams said. “This means so much and I love Auburn University so much. To win it here is really special. The Auburn people coming out was a big part of this win and it was great to feel the excitement.”

“So many of the Auburn family came out to support us today,” junior Ava Stearns said. “The energy here was fantastic and it was definitely a big part of this win. We want to thank everyone who came.”

Green was placed on the SEC All-Championship team after going 1-0-1 in Horsemanship this weekend.

Auburn opened the day with a 5-4 lead following Flat and Horsemanship.

The Flat corps put together a 4-1 showing and started out with Kurtz’s MOP ride as she bested Rhian Murphy, 268.5-258.5. Sophomore Ellie Ferrigno followed with a 245-202 victory over Kaitlyn Lovingfoss and Steckbeck scored 225.5 points in her win. The Aggies took the next point before Stearns topped Caroline Dance with a 257.5-206.5 victory.

Horsemanship picked up a point from junior Olivia Tordoff as the Powell, Ohio product scored a meet-best 231 points for the win. Green tied her match with Hanna Olaussen, 228-228.

Auburn needed five more points to seal the team victory after intermission and got four from Fences as the Tigers once again went 4-1 on the Jumping Seat side of competition.

Kurtz edged Brooke Brombach, 247-245, to get things started. Stearns followed with 253 points in her win and Ferrigno earned a tight 265-262 victory over Haley Redifer.

The Aggies took the fourth match to cut Auburn’s lead at 8-5, but Steckbeck gave the Tigers their ninth team point with a huge 271-256 win for MOP.

The two teams headed into Reining with Auburn needing just one point for the team victory.

After the Aggies took the first point, Green sealed the championship win with a 211-207 victory over Lisa Bricker. Junior Boo Kammerer added a bonus point to the team score, besting her opponent, 210.5-0.

Auburn looks to close out the season with another trophy as the team will head to Ocala, Florida for the 2022 NCEA Championship. The three-day meet will be held April 14-16 at the World Equestrian Center.

The Friday Show Presented By Woodbine: What Makes Up The Thoroughbred Makeover? – Horse Racing News