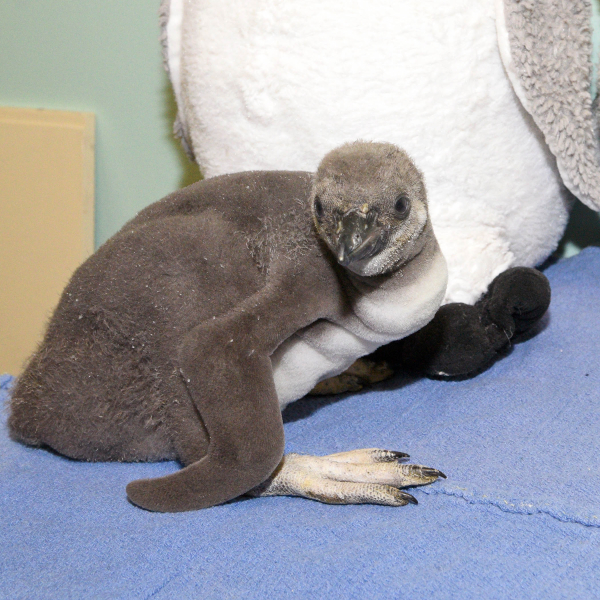 Brookfield, Ill. —A month-old Humboldt penguin chick, who hatched at Brookfield Zoo on February 2, is growing by leaps and bounds. The chick is only the second successful offspring for parents—14-year-old Divot and 21-year-old Rosy—making its hatching extremely significant to the Humboldt penguin population in Association of Zoos and Aquariums’ (AZA) accredited North American institutions.

MORE PICS BELOW THE FOLD! 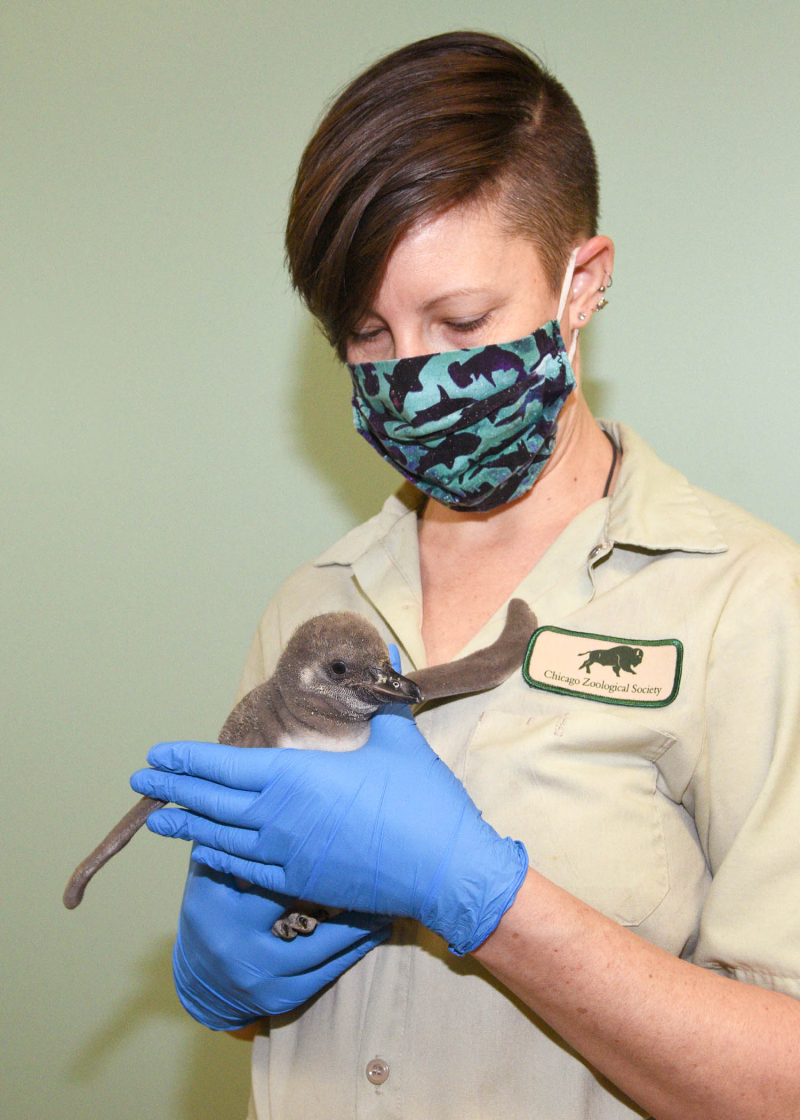 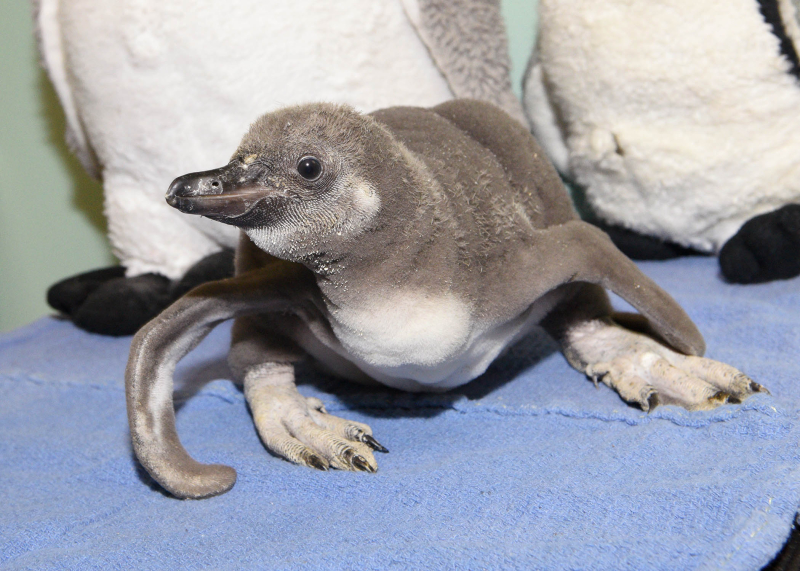 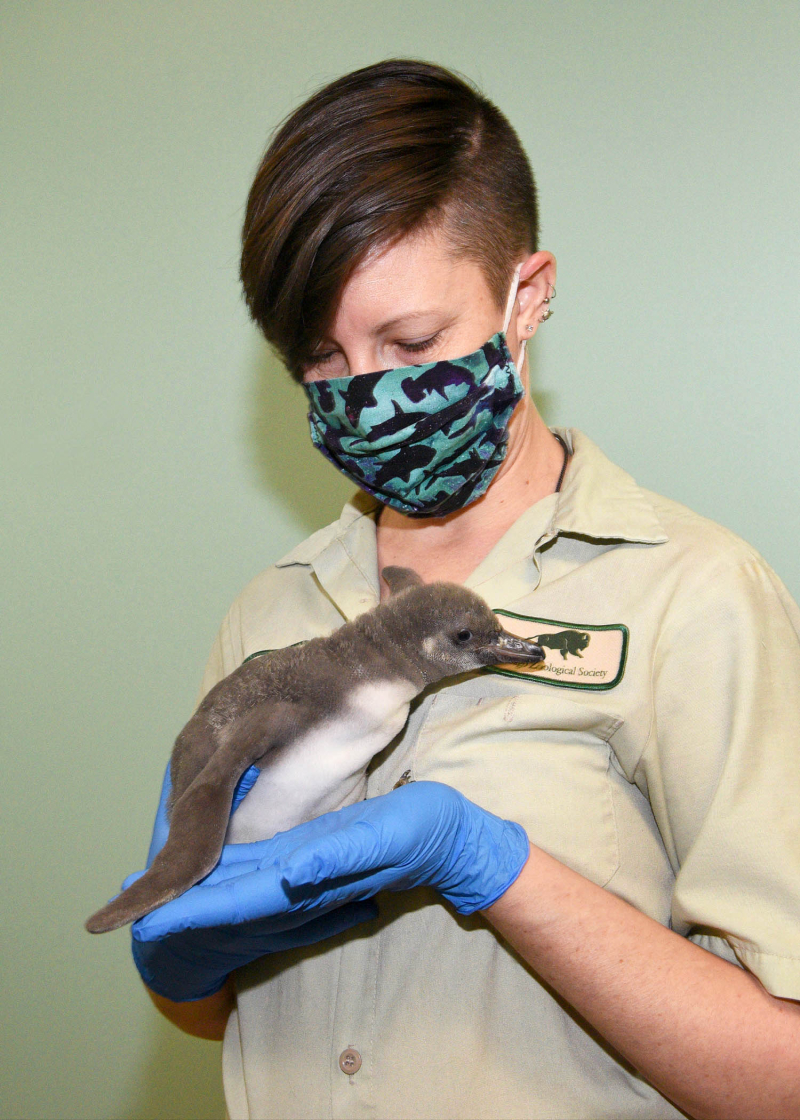 The pairing of Divot, who hatched at Brookfield Zoo in 2008, and Rosy, who arrived in 2013, was based on a recommendation from the AZA’s Species Survival Plan (SSP), a cooperative population management and conservation program. Each SSP manages the breeding of a species to maintain a healthy and self-sustaining population that is both genetically diverse and demographically stable. Divot and Rosy, who have been together since her arrival, are the most genetically valuable pair at Brookfield Zoo because they are considered underrepresented in the overall AZA Humboldt penguin population. Brookfield Zoo, which has 30 Humboldt penguins in breeding and non-breeding colonies, is one of 20 AZA institutions to care for the species.

The unsexed chick is currently being hand-reared by animal care staff. In the wild, Humboldt penguin parents typically stay and care for their chicks until the young are about 70 to 90 days old. The adults then leave the breeding ground and go off to sea, leaving their young to fend for themselves. Prior to the chick reaching that age, and to mimic the natural cycle as well as to improve the health and welfare of the birds, at Brookfield Zoo, when a chick reaches a certain weight, animal care staff take over. The chick still knows it is a penguin, but the shift from parent-feeding to self-feeding makes for an easier transition on both the adults and the young bird. It also allows care staff to better monitor the chick’s food intake.

According to IUCN’s (International Union for Conservation of Nature and Natural Resources) Red List, Humboldt penguins are “vulnerable” in their native habitat along the western coast of South America near Peru and Chile. The penguin population, which researchers estimate to be less than 24,000, continues to decline due to several factors, including climate change and severe weather, human encroachment, energy production mining, and pollutants among other threats.

Guests can see the Humboldt penguins at Brookfield Zoo’s Living Coast habitat. For those interested in a more up-close experience, the zoo offers two programs—Penguin Encounter, which allows participants to mingle with and possibly touch a penguin, and Penguin Feeding Adventure that provides the opportunity to feed the charismatic birds. For information about these two programs, go to CZS.org/PlanYourVisit.