More
Home BIRDS How to Know the Birds: No. 68, SY AMRE–ATS 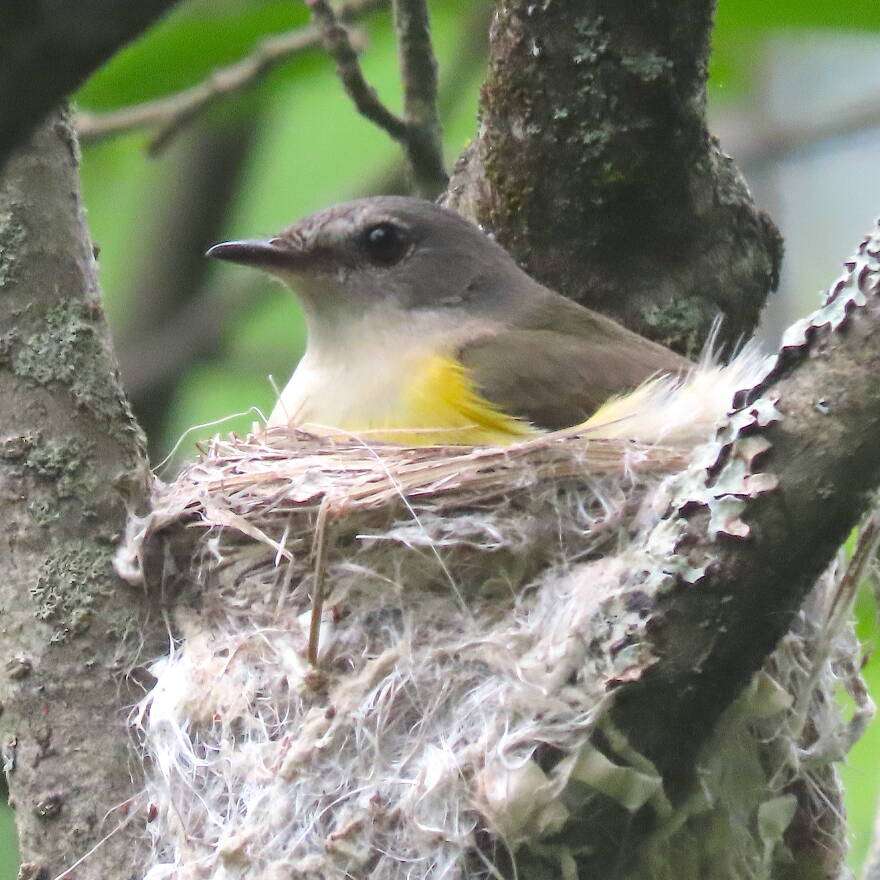 I knowingly saw my first American Redstart 40 years ago this summer. The bird was not a full-on adult male, splendiferously black-and-blaze-orange. It was more muted, light gray with lemon-yellow highlights, perhaps a female, perhaps a male in its second summer. Males in their second summer wear a female-like plumage.

I have subsequently had many hundreds of encounters, likely well over a thousand encounters, with the species. When I lived Back East, I saw redstarts every year on spring migration and then again in the fall; I usually made one or more trips annually to their breeding grounds in the Appalachians and elsewhere; I remember the first time I saw redstarts on the wintering grounds, in the company of Adelaide’s warblers in the sunny Guánica dry forest of southwestern Puerto Rico; and although I have lived in the western U. S. for more than half my birding years, I nevertheless cross paths with this mostly Eastern warbler from time to time at vagrant traps and on the highly localized breeding grounds in Colorado and elsewhere.

My most recent encounter, in a northern hardwoods grove outside Portland, Maine, was with a bird not unlike the one I saw 40 summers ago. The bird was in its second summer, i. e., it was hatched in 2021, and it was a male. Birds in their second calendar year are called SYs, denoting second-year individuals, and the official four-letter code for the species is AMRE, for American redstart. I can’t recall if I already knew those abbreviations in 1982, but I might have; by the mid-1980s, my field notebooks were jampacked with SY AMREs and such.

The SY AMRE near Portland was also ATS, after the spark.

Birding after the spark is an idea I’ve long associated with Kenn Kaufman, who for quite some time wrote a column titled, you guessed it, “After the Spark.” I’m oversimplifying it, but “After the Spark” was a compendium of reflections on the experience of birding following the initial revelation—the epiphany, or “spark”—that this world of ours is brimming with birdlife. I had caught the birding bug, big time, by the summer of 1982, but I also think it’s fair to say that I was still in that phase of near constant wonder at such marvels as redstarts, even comparatively drab SYs.

The ATS SY AMRE of Fri., June 27, 2022, first attracted my attention, as ATS warblers so often do, by its song, bright and repetitious:

Even without recourse to a computer readout of the bird’s song, I could tell that the bird’s song wasn’t quite right. It was missing the characteristic terminal buzz, usually on a different pitch from the other song elements. Of course, I do have recourse to said readout, in both spectrogram and oscillogram (waveform) formats:

The bird was holed up in pretty dense shrubbery, but I learned long ago—sometime shortly after the spark—that redstarts, along with yellowthroats, are strongly attracted to pishing. So I said “PSH PSH PSH PSH PSH” with this result:

Ah. Yes. Note the black splotches on the breast and throat. That’s entirely typical of a male in its second summer. An ASY (after-second-year) male would be sporting the “redstart classic” plumage: black and orange. It makes sense that an atypical song would be sung by an SY male, a bird still figuring things out. But it didn’t have to be a male at all: Female song has been documented in the species. That’s one of those things that, speaking for myself anyhow, I learned ATS.

In any event, an SY male by plumage, with corroboration by the somewhat aberrant song.

A short while later, my companions and I were in a forest clearing ringed with speckled alder, Alnus incana. Here: 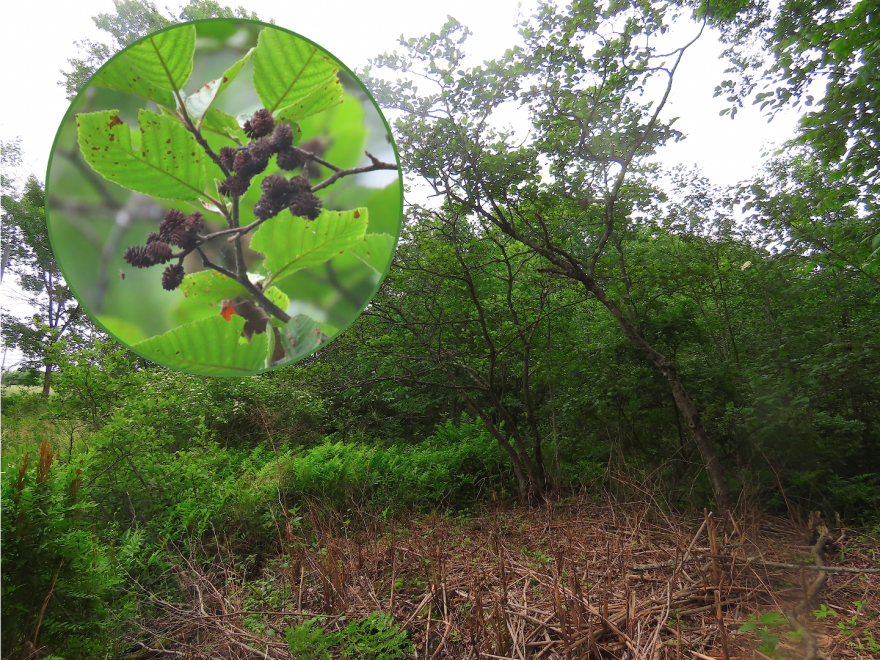 Photo and inset by © Ted Floyd.

Perfect habitat for redstarts. They like it forested, but not too forested; they like clearings, but not too cleared. We saw redstarts here, and we heard them; and the youngest birder in the group, a high school senior, noticed that one of the birds was sitting at a nest! The bird was a female, her nest in the crotch of an alder: 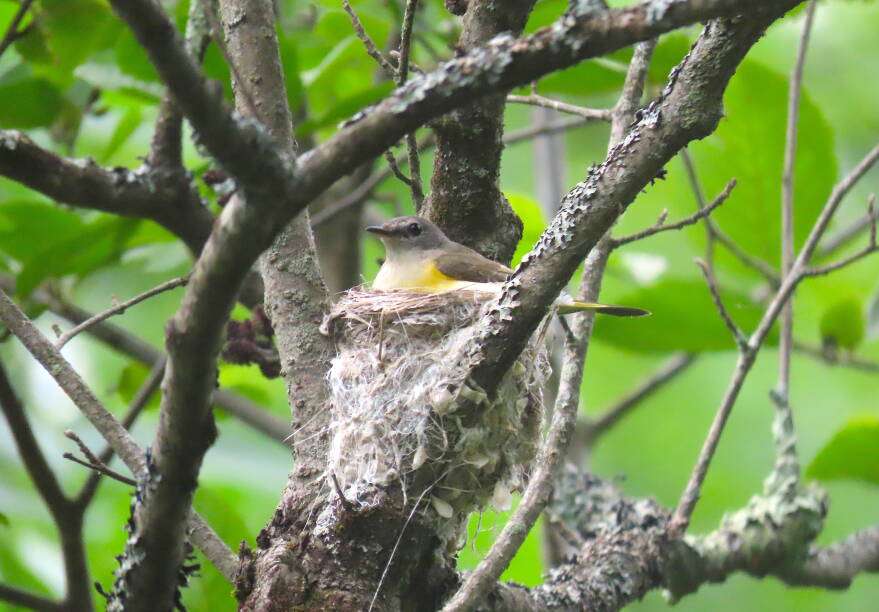 We watched for a while. The female left after a bit, and the male arrived with food for the nestlings: 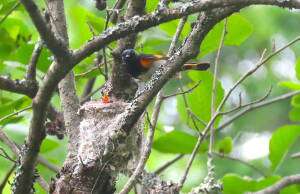 Now that’s a male redstart, an ASY with the stunning black-and-orange garb. I wonder if that was the first time in my life I’d ever seen a male redstart bringing food to the nest. I don’t know, but I this I do know: That’s an ATS sort of thing to wonder about. Many hundreds of redstarts ATS, likely 1,000+ such redstarts, and there’s still cool new stuff to notice and to think about. And it’s not just incremental new knowledge and ponderings, granular little delights and discoveries, every time I go afield—although there is of course a great deal of that. It’s also big picture stuff, whole new ways of engaging birds and nature.

Ten years ago, back in 2012, I did something I’d never done before: I uploaded a recording to Xeno-Canto. A few years later, I bought a point-and-shoot camera and started uploading photos via eBird to the Macaulay Library; and a few years after that, I was uploading videos to Macaulay.

The day I saw the redstart in Maine, June 17, 2022, I uploaded to eBird 4 photos, 2 videos, and 7 audio recordings. I also uploaded to iNaturalist photos of 14 non-avian objects, including a British soldier lichen, a honeycomb coral slime mold, and an eastern red-backed salamander. And that cloudy Friday last month was a mostly non-birding day of travel and social engagements. You should see the amount of content I create on full-blown birding days!

For more than 75% of my birding life, the actions I’ve just described—recording birdsong and photographing slime molds and salamanders—were stuff I never did at all. Yet those actions were, in some sense, predestined. Sometime in late 2011, as I was embarking on my fourth decade as a birder, I’m sure I had a thought—maybe I even said it out loud or wrote it down—that went something like this:

For three full decades now, I’ve been marveling at birds, yet continually updating my knowledge and methods as I go along. I don’t know what the fourth decade will bring, but I’m confident it will be new and different.

And, now, in the beginning of my fifth decade as a birder:

For four full decades now, I’ve been marveling at birds, yet continually updating my knowledge and methods as I go along. I don’t know what the fifth decade will bring, but I’m confident it will be new and different.