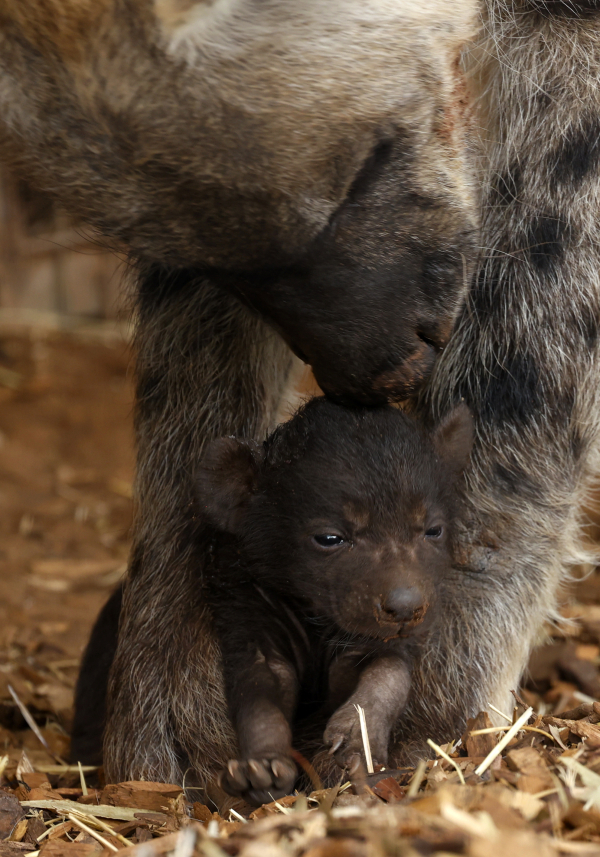 Who could resist that little face? An adorable little chocolate-brown cub has joined the Spotted Hyena clan at Monarto Safari Park.

Born at the end of August, keepers have been monitoring the clan while allowing time for the little one to bond with mum, 14-year-old Forest and dad 19-year-old Gamba.

Spotted Hyena cubs are born with a black or brown coat, a full set of teeth and their eyes open.

Their spots and markings begin to develop over time and the little ones can emerge from the den as young as a few days old.

Assistant Curator of Ungulates and Carnivores, Jon Allon, said keepers have ‘spotted’ a few glimpses of the cub. 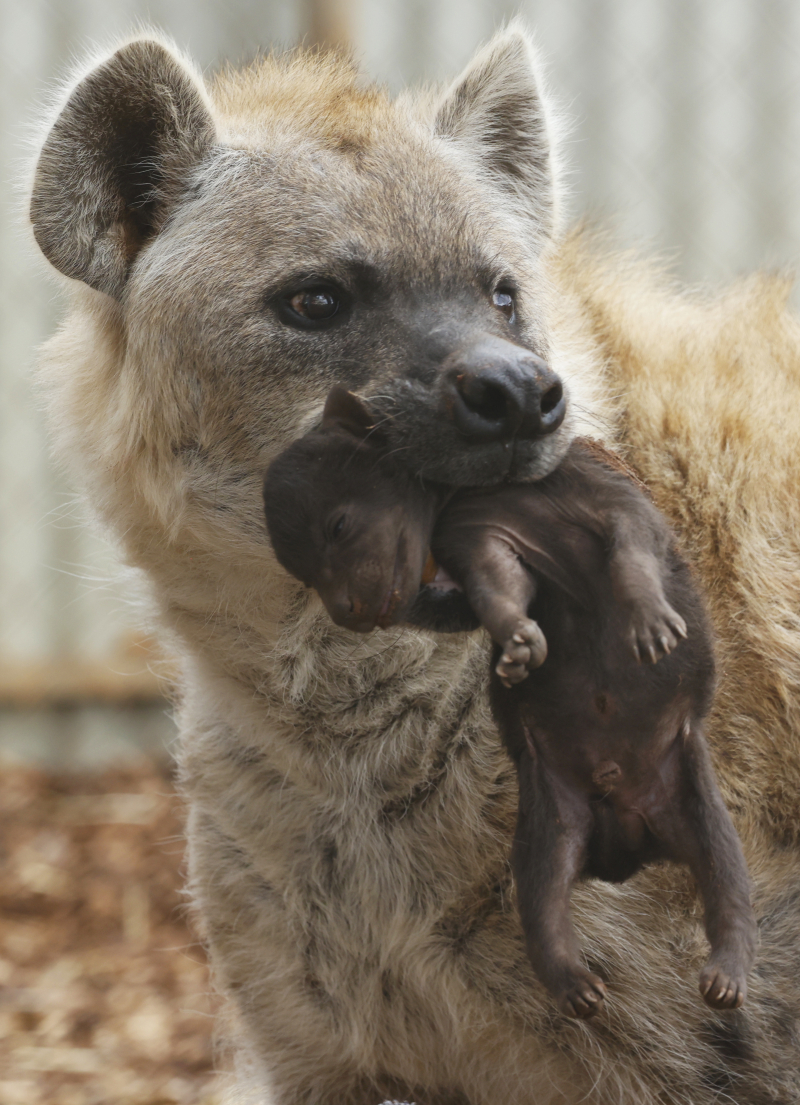 “Forest has brought her cub out of the den a few times, so we’ve been able to see the little one and monitor how both the cub and mum are doing,” he said.

“Forest and Gamba are a bit of a power couple so they’ve both been looking after the cub and the family are all doing really well.

“Hyena are an often misunderstood species, they are highly intelligent and are excellent thinkers, problem-solvers and are incredibly inquisitive. 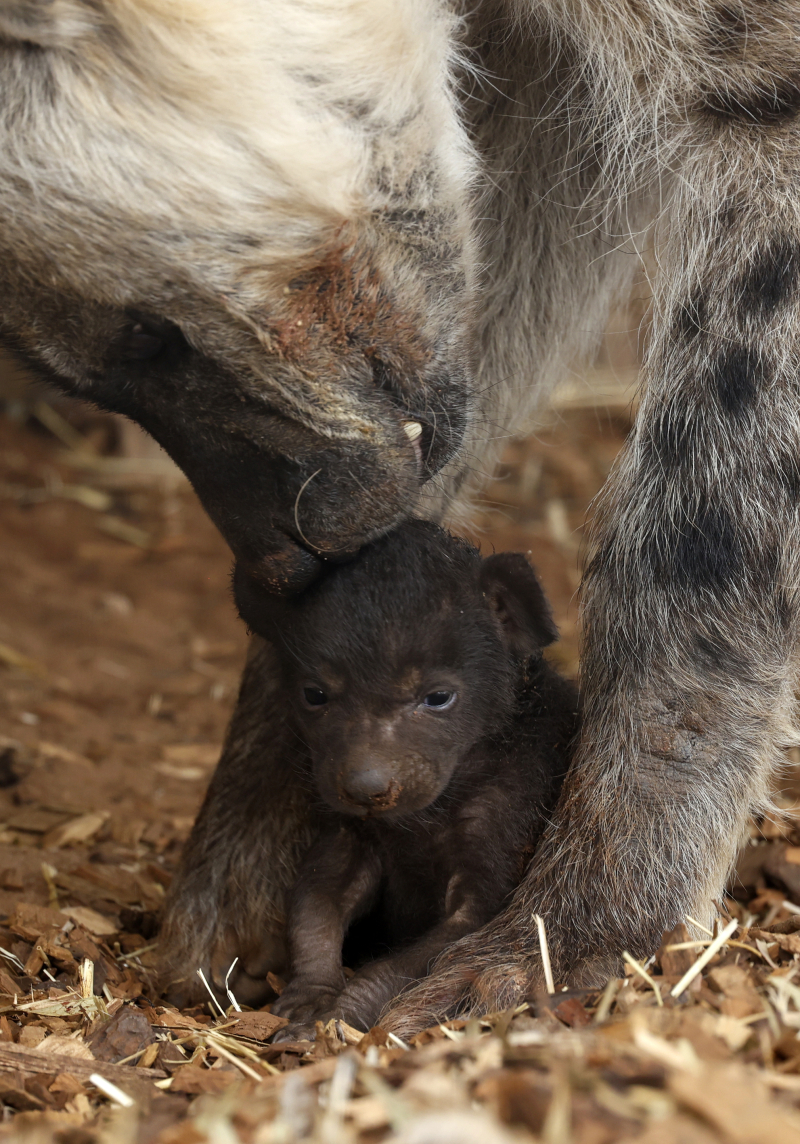 “Their species is often portrayed as scavengers, but they are actually very successful hunters and get up to 75 per cent of their food from their own kills.

“In the wild, their numbers are decreasing so it’s amazing to have a cub born here to act as an ambassador and help visitors learn more about this brilliant species.”

Forest has successfully given birth to seven cubs, including one born through Australia’s first hyena caesarean section in 2013.

It is notoriously difficult to tell the sex of a Spotted Hyena, with the external genitalia of both sexes appearing very similar, females have a pseudo penis through which they urinate and give birth.

A skin sample will be sent to the Serengeti Hyena Research Group in Berlin over the coming months to determine the cub’s sex.

While we await the news, we hope more cubs will join our newest bundle of joy at Monarto Safari Park and support the conservation of the species. But to do so, we need a new birthing den and cubbing box to safeguard new arrivals. Could you help?

Your donation of $50, $100 or $200 will help us build vital Spotted Hyena facilities and help us see more adorable bear-like faces join the clan!

By donating, not only will you be supporting conservation but you will all also have the chance to name Forest’s cub.

A link to vote will be sent after donation to choose between a shortlist of adorable Swahili names including Tumaini (hope), Cheka (laugh) or Cheza (to play).

The winning vote will also receive a Lions at Bedtime experience to see the clan up close. For all the details on donating and the naming competition, please click here.

For more information about how to donate to Zoos SA, Spotted Hyena or Monarto Safari Park, please visit monartosafari.com.au.

Spotted Hyenas are a social bunch: They live in large groups made up of up to 90-120 individuals. These are known as clans, and are often made up of smaller family groups or sub-clans, which break away and come back together over the seasons.

Females are in charge: Females are the dominant sex in a group of hyena and the leader of the clan is known as the matriarch. Male Spotted Hyena are ranked lower than the lowest female of the group. Females are normally 10 per cent larger than a male, girls weigh about 65-70kg whereas the boys reach 50-55kg.

Spotted Hyena have very powerful jaws: Their bite force is stronger than a lion or tiger! In fact, they can break open the leg bones of large animals, even bones that are three inches in diameter.

That giggle they’re famous for? It’s not really a laugh: The infamous hyena laugh is a noise they make when they’re nervous. Usually, it’s the lower ranking animals making it during feeding time or when there’s a fight.

A hyena is not related to a cat or dog: You might think hyenas share some similar-looking traits to dogs, but they are most closely related to the Mongoose family!