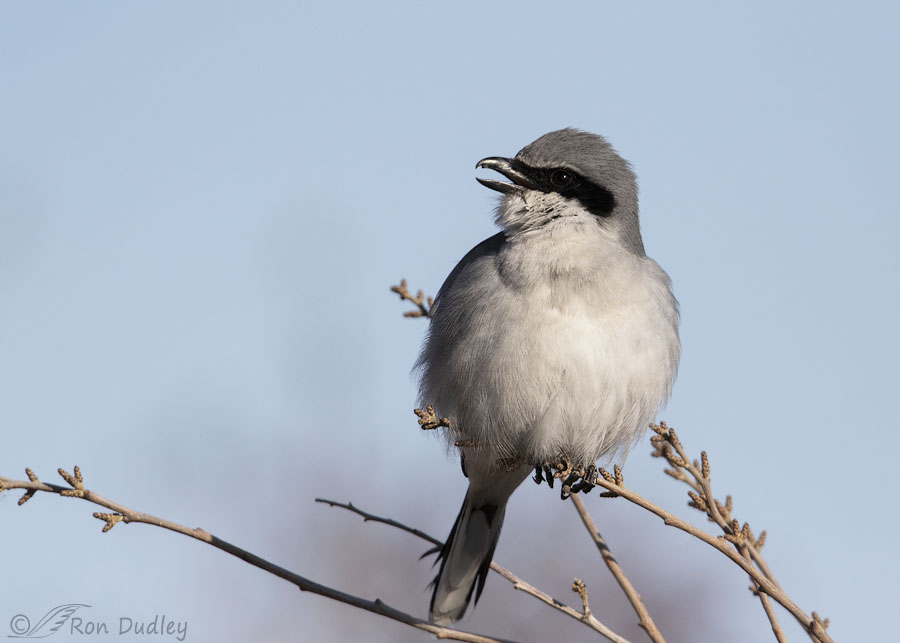 And an unusually light colored Rough-legged Hawk that literally glowed against the dark blue sky.

Yesterday was our coldest day all winter. And yesterday morning my shooting location was the coldest temperature I’ve seen in a very long time. Given the troubles I’ve had this winter with getting sharp shots in cold weather I knew my strategy of keeping the inside of my pickup (and thus my camera gear) cold was going to be put to the ultimate test. So I bundled up in warm clothes, cranked down my heater and girded my loins for several hours of frozen fingers, feet and ears while looking for birds.

It was 0° F. when I arrived on site shortly after the sun came up over the mountains. Temps like that get your attention, especially when you’re out in the middle of nowhere and the air pressure gauge in one of your tires starts warning you that the tire is losing air pressure. Thankfully it didn’t turn out to be a leak I needed to worry about. The cold temps had simply reduced the pressure in that tire to the point that the warning system was activated. Yes, I filled the tire when I got home.

To me 0° F. sounds even more impressive when I realize that it’s a full 32 degrees below freezing. Not that I needed to be impressed, the bitter cold was doing an excellent job of that all by itself. 40 below was a fairly regular occurrence in winter when I lived in northern Montana but at my ripe old age my tolerance for cold has diminished considerably.

I did find a fair number of birds and this presumed male Loggerhead Shrike singing on territory was one of them. Given how cold it was I was surprised that he even felt like singing but his fluffed up feathers must have really helped to keep him warm and in the mood. He’s tilted to vertical because he was perched on an angled twig and squatted down on his feet to keep them warm. Either that or I didn’t keep my lens level…

One of the reasons I like this photo is because we can see his tomial tooth (falcon tooth) so well.

I heard at least three distinctly different “songs” from this shrike, even though to call it singing is a bit of a stretch. Many observers think that Loggerhead Shrikes “possess only rasping, harsh shrieks or unmelodious call notes”. I wouldn’t disagree.

Later in the morning, by the time I was nearly ready to head home, it had “warmed up” to 18° when I photographed this unusually light colored Rough Legged Hawk semi-hovering above me. I can’t even begin to describe to my readers how beautiful ‘he’ was against the dark blue sky – the photo doesn’t do him justice. The hawk literally glowed against the darker sky background, in part because there was a rim lighting effect along his feather edges that isn’t very apparent in this photo.

But in the end my strategy of keeping the interior of my pickup and my camera gear cold, failed. There was just too much difference between the outside temps and the inside of my pickup. The only truly sharp shots I got all morning were a few, very few, of the shrike.

I look forward to warmer temperatures every winter but this winter is different. I can hardly wait.